About a week or two ago, I was driving down 684 in Meigs County Ohio when I passed a sign I had passed many times before. The sign reads, “Scipio Township News” across the top and has a marquee portion where the letters can be changed to read different messages. This sign often advertises things like pancake breakfasts to raise money for the local volunteer firefighters. It also often advertises Meigs County Tea Party Meetings. For a few weeks last summer it read, “Senator Sherrod Brown Supports Cannibalism at Planned Parenthood.” On this day, it read, “Bye Bye Obama, 2 Days Left. Try him, Hang him. Remember Benghazi.” This is when I decided it was just too much. I am a white woman, but I come from a somewhat Multicultural family and have been aware of race issues since I was a small child. I currently only have four Black friends who are close enough to have been to my house, but every one of them has mentioned at one point in time or another that they don't feel safe driving out this way alone. What if they broke down? There is no cell phone reception. Would they be safe walking up to a random house asking to use the phone? The number of confederate flags that began popping up throughout Trump's campaign had had us thinking, maybe not. These confederate flags had been bothering me for quite a while, but I couldn't come up with what to do about it, since they were private property being displayed on the homes of people I didn't feel safe approaching. But now, there was a message on a sign that seemed like public property that was promoting the hanging a Black man. I pulled over, got out, photographed the sign, and began removing the letters. I had gotten almost all of them removed when an older white woman pulled up behind me, using her car to block my car in. She said, “Why are you removing those letters?” I said, “There was a racist and threatening message, and I can't tolerate that.” She said, “No, there was not,” and told me that I was trespassing on private property and that I was to leave the letters on the porch of the house nearby. I told her that my plan was to call township officials, provide a photo of the sign, and hand the letters over to them. She told me again to put the letters on the porch and photographed the license plate of my car before driving off. I was afraid that the cops would be after me, but I drove to the library and sent the photo and a shorter version of this story to People's Justice League. They published it on Facebook and called the authorities for me. A township trustee informed us that the sign was private property and that there was nothing he could do about it. PJL informed him that a lot of people were upset about the current message and that they think that he approved it. He said that he would have the top portion reading, “Scipio Township News” removed, and a few days later, it was down.Meanwhile, upwards of 67,000 people saw the photo on Facebook. The comments that popped up over the first hour or two were from supportive allies giving ideas on what could be done. What followed that was unnerving. There were hurtful comments coming from all sides. Moderates didn't understand the importance of the context of the message within the history of racial violence in this country. Liberals hurled classist insults drawing on negative stereotypes of Appalachians. And local Conservatives posted threats of litigation and even physical harm. I didn't expect any of that when I took the letters down. I just knew that that message shouldn't be there, and I did something about it. 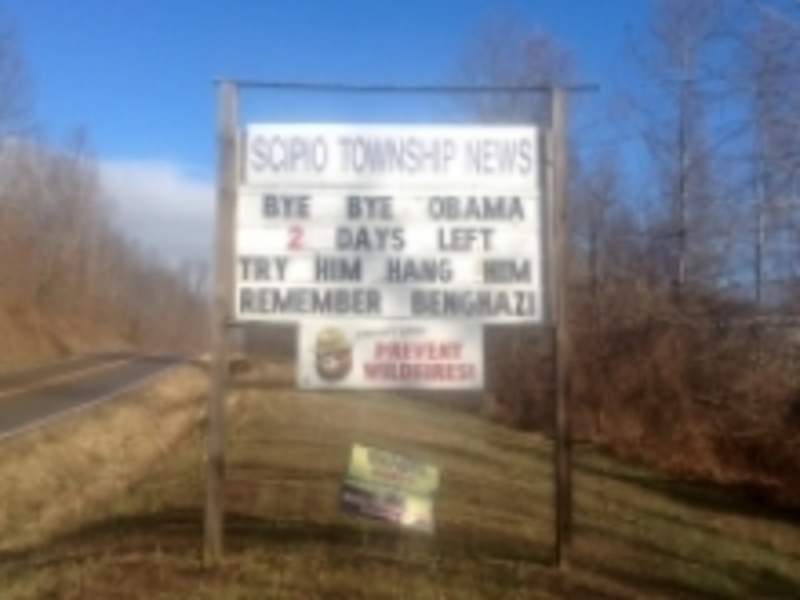 2
I Got Your Back
Submit your own Incident